Comparing Yourself To Others Will Keep You Stuck 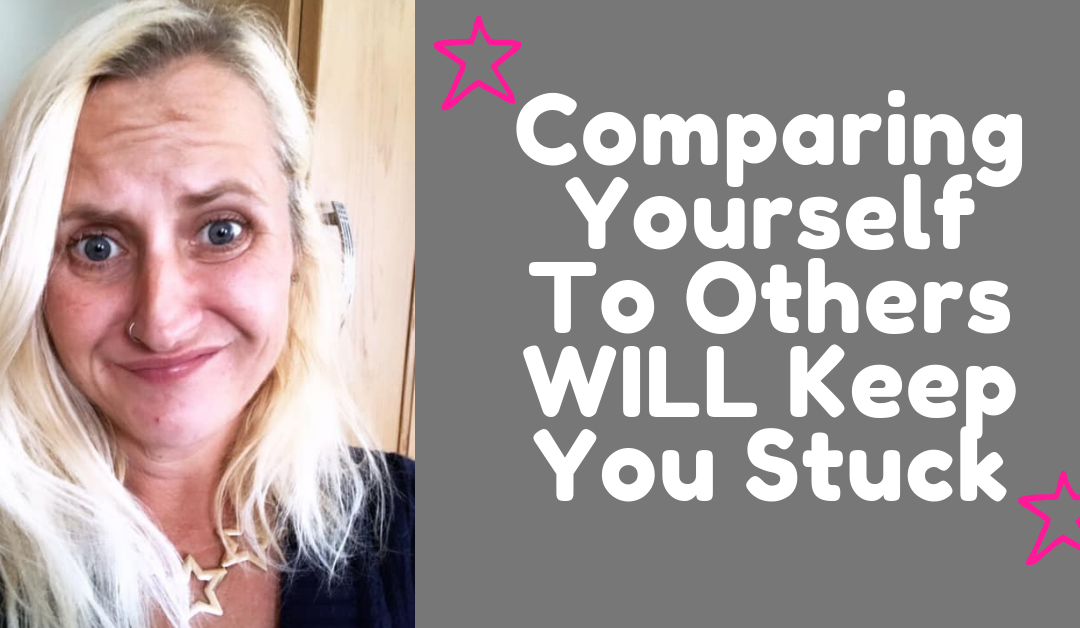 A wrote this article a little while ago BUT I know that it needs a little edit and a brand new airing.  It went a little something like this….

At the time of writing this article a new podcast episode has just hit the listings which’s all about not judging other people’s stories based on the chapter you rocked in.

I recorded it because I know that it’s common. That feeling by people “it’s alright for you because……..” and I know that that is a position that can keep stacks of people stuck.

Before we go anything further, you can listen to the podcast here….

~ Check Out The Podcast Here ~

Being stuck in comparison sucks and being stuck where you’re giving away the power of what you CAN do because you’re focused on what you can’t do, with the belief that others have it easier than you will keep you stuck.

A discussion on this episode certainly talked to a few people.

The lovely Kristina Smith (who actually edits my podcasts) was a little triggered by the content..

Here’s what Kristina sent me…

I caught Emma on one of her live videos last week, speaking about “it’s alright for her because x, y & z”, and how easy it is to look at how well others are doing in life, and thinking they had it handed to them, or it was easier for them one reason or another, but it could never be that easy for us. And then Emma’s Podcast this week really cemented it for me – I WAS THAT JUDGER thinking it was fine for everyone else that was doing their own business thing, because they clearly had some advantage that I didn’t.

WRONG! I was so wrong!

The only thing I didn’t have that they did was the courage to just get on with it!

When I was younger, and growing up, the only things I wanted to be were a mum and a witch! 😉 I had no clue what career path I wanted to go down, something “businessy”. Some people just KNOW what they’re going to be when they grow up, I didn’t. It was OK for them!

After having my third baby, I left my job in our local authority – childcare costs and juggles outweighed the benefits of stable employment and in all honesty, I didn’t have a PLAN. I decided I’d figure it out as I went along.

Last year I studied and bagged a qualification in bookkeeping – THAT was going to be my plan after having quit my job. I was going to start doing some freelance bookkeeping. But I began working with a good friend and ex-colleague doing some associate VA work and quickly realised how much I enjoyed it! And when I realised how much I enjoyed it, I started dreaming of some day having my own clients.

But again, Judgey McJudgerson kicked in – it was OK for other VA’s, they already had their clients, there wouldn’t be any left for me, and why on earth would anyone choose to let me loose in their businesses over already established VAs?! They obviously have far more qualifications and experience than I do. It’s OK for them.

I was a serious Negative Nora – it was alright for everyone else!

But as I started getting comfortable with how much I was enjoying the work I was doing as an associate, how “me” it felt, my confidence in my OWN abilities started growing tiny bit by tiny bit. I was having a ball, and REALLY enjoying what I was doing! I set myself a goal – for a year from then – of having my very own client.

I signed up to a few amazing courses with some of the most amazing business women I’ve ever met, learned HEAPS of new skills, and with each new skill came a whole new round of confidence.

But it still wasn’t quite enough to help me start putting myself out there and grabbing my own clients. Judgey McJudgerson was telling me that I had to be a certain type of VA – someone very professional, who’s done course after course on “how to be a virtual assistant”, who carries a virtual briefcase and wears a virtual suit. It was OK for the other VA’s because they could fit in to that category…

Funnily enough, it was Emma that “virtually” grabbed hold of me back in January when I signed up to her Ctrl, Alt & Delete course and told me “that’s bollocks! You’ll get more clients by being YOU, than trying to be someone you’re not!”.

It was OK for Emma, she was rocking this biz thing, it was easy for her to say that unleashing the real quirky and excitable (sometimes uncontrollably so) me on the world would result in more clients….

But bugger me, she was right! And she wasn’t the only person to tell me that. And what a long way I’ve come since I stopped watching what others were doing, and just STARTED DOING!

When I listened to Emma on her video last week and her podcast, I came to realise that I don’t look at anyone else who’s rocking it now, and think “well, it’s ok for them because x, y &z…”. I think “YAY, look at her go!”, whilst cracking on with my own stuff.

Everyone has their own stories, but I reckon if you have enough love, devotion, passion and courage for what you want to do, you can be anything you want to be.

I am living my dream now, but there’s absolutely nothing more special about me than there is about anyone reading this and wondering if they’ll ever be able to pull it off. My only secret weapon is the people around me who encourage and support me every day – and chances are, if you’re reading this blog, you’re already in the right place!

PS – I still haven’t ruled out someday becoming a witch 😉

What Do You Need To Do Instead?

It’s easy to say – stop bloomin looking, it’s none of your business, blah blah blah but I know that sometimes lots of you can’t help put peek!

It’s easy to overthink the competition and get bogged down with how successful they are (or appear to be). So next time your eyes take on that bit mushy-pea kinda tinge, remember this:

💖They don’t connect with people the way you do.

💖 They have a different outlook to you.

💖You are your USP, that’s why you attract your raving fans.

💖There are billions of people in this world and they aren’t all going to choose your competitor.

I know that you can look at people and question yourself – why have they made this/that/the other happen and you feel stuck?! It can take the wind out of your sails and it can leave you depleted. Whilst you are watching their grass you ain’t tending to yours. There’s nothing you can do about their grass other than look at it in envy – why not switch your attention back to yours.

If you find that curiosity is overwhelming you then stop following these people on Social Media – for me, if something doesn’t light me up, add to my world or is an absolute HELL YEAH then by default it’s a no and it has no space in my newsfeed or my inbox, for that matter.

The reaction I’ve had to that one in the past has been “but I need to know what the “competition” are doing.” Well if you feel that strongly that you need to know then have dedicated time to do it, when you’re in a good place and don’t simply let it fall into your sight willy nilly.

I can categorically say that I don’t give a shit what other people are doing who are in “my sector” or “my space” (unless of course they are Rockstars then I’ll support in every which way I can and be a gazillion percent invested in their success).  This isn’t arrogance nor is it one that should trigger the “well it’s alright for you” thang.  This is because;

① I have no fucking idea what’s really going on in that business from merely observing.  Things that sparkle aren’t always gold.

② My energy & attention going into that serves NO-ONE

③ I can hand on heart say that I believe that there’s room for everyone and I hope that everyone achieves their definition of success.

⑤ We grow our own followings and tribes AND sometimes people will follow numerous people in the same sector and that’s ok.

⑥ AND MOST IMPORTANTLY – my time, effort, energy and attention is best spent on MY business.

Now STOP being in a funk about it, stop comparing yourself and give yourself a chance to freakin shine!! 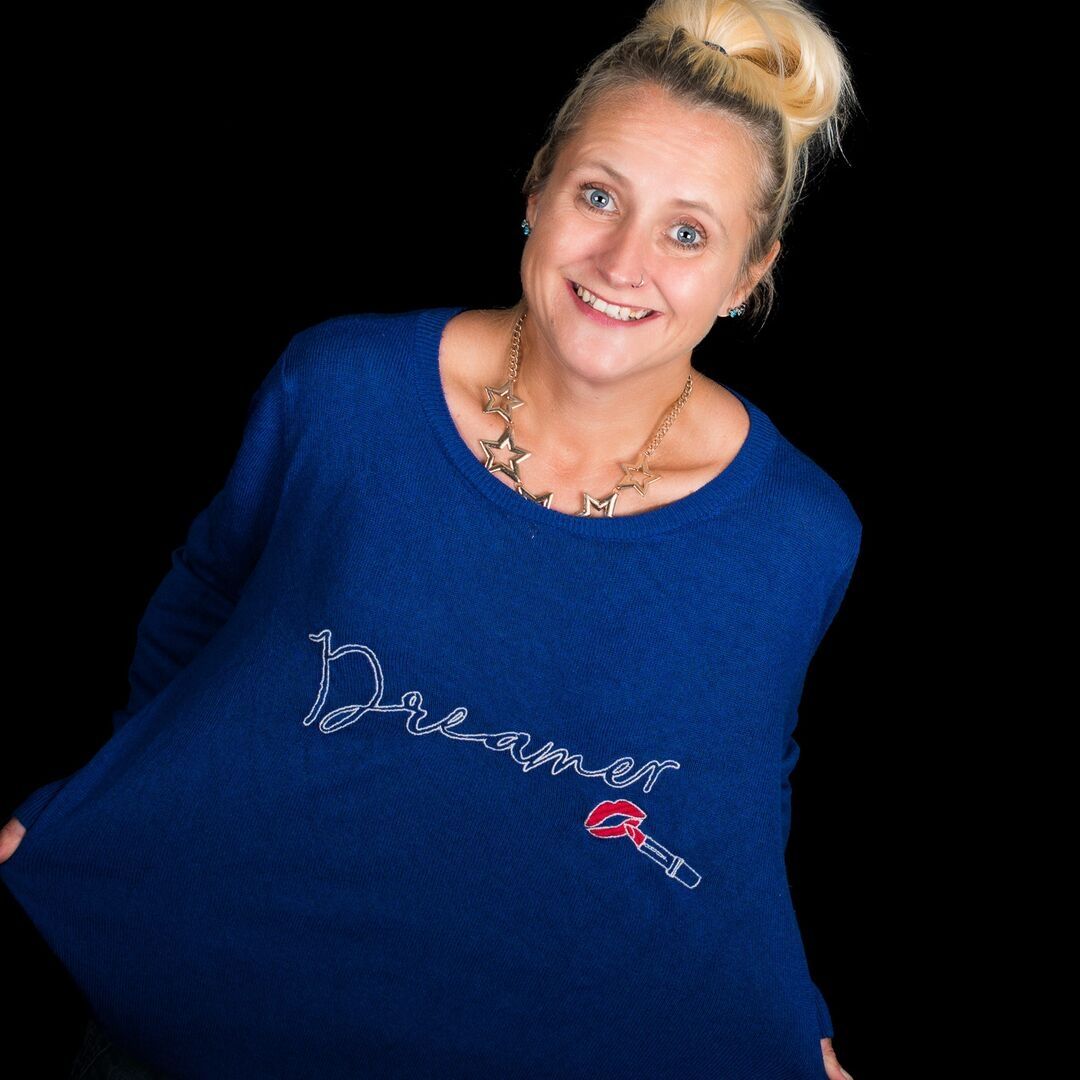